Tags for Teach kids in 45 mins to ride Cycle

Cycling is considered as a very good exercise for both adults and kids. Parents should teach their kids cycling at an early age so that the child becomes very confident at riding the cycle. The fear of not balancing should not be there in any child for that proper practice must be given to the child at an early stage. Few tips are given that parents can use in day to day lives to make their child confident and strong. 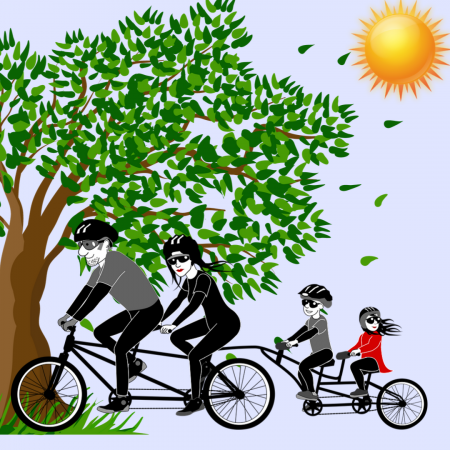 Preparing to teach your child to ride a cycle, then it’s not always clear exactly where exactly to start.

Here are some ways to teach them to ride cycles easily:

It would take not more than 45 minutes to one hour. Time duration can vary from child to child. It is dependent on prior coordination with your child.

JustBuyCycles quotes that “It is very important that you wait up until that point, when your child has developed coordination rather than forcing it because then it can become stressful for your child"

At what age should we start

An approx of four to six of age is the best to learn to ride a cycle. But yet again, the age for every child differs from one and another as their mind must be ready to learn. If you don't get them to ride the cycle in that age, after six they might become more cautious about it. There is window out there when they can learn easily so the age of four to six is the perfect agar to learn. Children often learn by looking at others, so riding in front of them can be a good idea, so they can have a clear idea on what they are about to do.

How should you start

It should always begin with without peddals. A child can only learn when he has the feeling and balance of the bike, the coordination between the two has to set so that they can ride freely. Removing pedals and lowering the seat slightly will make the child to push themselves to balance and turn a bike on. The seat shouldn't be too low also, as the child might completely rely on their feet to balance the bike. The seat must be in a position where the legs just touch the floor.

It could be a place where there isn't a lot of noise and has a flat surface throughout. Places like hills or any other place with slight should be avoided so that the cycle doesn't pick up the speed at once. They say riding on grass is very easy for they don't know it is very difficult as the child will have to push the bike very hard.

Holding onto the child’s torso or under their armpits as they ride will be the best way to do so. It is important that you don't hold on to the handlebars as you will be trying to support them and make them feel more protected but they can get irritated by this and can lash out at you. By holding their torso they will learn how to ride the bike on their own and will understand it better. The balancing can be done by you gently moving them from side to side.

Next step after Teaching

Make them ride on their own but don't leave their side. Once they start to ride on their own you often will get tempted to leave them as a free bird, but you have to stay by their side to support them and protect them as they might not be very confident in riding it all on their own. If they fall or dash somewhere after you leave them, it might scare them off at a very early stage. After they are very confident and very happy to ride the bike on their own it is a good idea to bring in the pedals. Following the steps given above they will get used to the pedaling in no time.