Tags for Does Nature or Nurture play a bigger role in who we are?

Does Nature or Nurture play a bigger role in who we are?

The debate on ‘Nature v/s Nurture’ has been going on since the beginning of time.  The question asked now is whether human behaviour is based on the environment or on the person’s genes or the experiences in a person’s life.

The combination of these two concepts are complementary. We think the two words, the first one, Nature as pre-wiring and the second, Nurture is generally taken as the influence of external forces after conception. Philosophers like Plato and Descartes suggested that certain things are inborn, or that they occur naturally regardless of environmental influences. Whereas, thinkers like John Locke, suggested that the mind begins with a blank slate, and everything that we are and all our knowledge is determined by our experience. Some concepts which can come under this is behaviourism and Heritability. Behaviourism refers to a psychological approach which emphasizes scientific and objective methods of investigation and Heritability refers to the origins of differences between people. It can also include inheritance of eye colour, it also depends on a range of environmental factors. 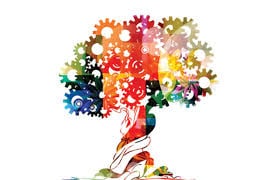 We can use some examples where both these concepts are used. Like, behaviour can be influenced through various parenting styles or through observation. If children see you behaving very aggressive then slowly they will also gain the trait of being aggressive. If you are very polite to others and to your child then your child will also learn to be polite.

There are various other hypothesis which have been brought to attention to note the changes in behaviour of your child. One of such hypothesis is ‘The Social pre-wiring’. Under this hypothesis a child or a person is wired from the beginning to be social.  This occurs naturally. We can see whether a new born is socially awkward or interactive as their emotions can be displayed when they are first picked up by any stranger other than their parents.

So, in conclusion we can say that both nature and nurture play an equal role in shaping a person’s behaviour.

Author For Does Nature or Nurture play a bigger role in who we are?